I owe my interest in cooking and baking to my mother and 4-H.  I watched her–a stay-at-home-mom–cook for us three times a day.  Whenever mom couldn’t be home to cook a meal, the oldest child at home would take over the job.  We all learned mom’s classic recipes and became pros at whipping up Hamburger Helper and Mac and Cheese.  When you need to feed 9 people fast, those shortcuts were big time and effort savers.

Once I was in the third grade, I joined 4-H and started taking sewing and cooking projects.   Let’s Bake Quick Breads, Star Spangled Foods, Yeast Breads on the Rise (advanced to state competition with that one), You’re the Chef, and more exposed me to recipes beyond our family’s typical repertoire.  I memorized the food pyramid, developed menus, calculated cost per serving, and took each project to the county fair for judging.  I did alright from time to time, too!

How did you learn to cook?  Did you sit with grandma in the kitchen?  Make cookies with mom?  Grill hotdogs with dad in the backyard?  Or did you learn some basics in home economics?  By the time I entered high school, the only sign home economics had ever existed was the sink and counters in the German room.  It had been removed probably to make room in the schedule for technology, drafting, and psychology.  At such a small public school (I graduated with a class of 30 students), it was hard to offer very many electives.

Some folks are considering raising this class from the ashes, albeit in a revised, modernized version.  No longer just teaching the girls how to be good wives while the boys take woodworking, the new Home Economics would cover a broader view. 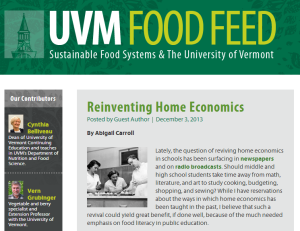 …The new home economics should equip students to better understand and engage with the larger food system. Where food comes from, how it is processed and distributed, and what policies have helped shape the foodscape we inhabit—these are all questions that will help the younger generation understand the implications of their food choices. In the new home economics, students might learn to read food labels and recipes not just for caloric value and fat content, but for the impact of business and policy on food production that plays itself out in the choice of ingredients.

This comes from the UVM Food Feed’s guest blogger Abigail Carroll.  She holds a PhD in American Studies and teaches in Boston University’s Gastronomy Program.    And she makes some interesting points.  Cooking in the home can have benefits that lead to better health.  We can control portion sizes, cooking methods, and menu options easier at home compared to restaurants.  Cooking at home also usually leads to eating together with others, which has been shown to have a variety of positive outcomes.

Carroll isn’t the only one drawing a line between cooking and several of our nation’s challenges.  Michael Pollan posits a similar theory in his book, Cooked.

At a certain point in the late middle of my life I made the unexpected but happy discovery that the answer to several of the questions that most occupied me was in fact one and the same: Cook.

Some of these questions were personal.  For example, what was the single most important thing we could do as a family to improve our health and general well-being?…How can people living in a highly specialized consumer economy reduce their sense of dependence and achieve a greater degree of self sufficiency?

As our culture abandoned the kitchen and took up convenience foods, we became infatuated with food television.  Through our basic cable package I get two channels that are completely devoted to food.  And several others dabble in the sexy new topic.  We watch others cook food and then order take-out.  How did that happen?  When did cooking become a spectator sport?

It’s time to get back in the game.  It’s time to bring back cooking, and not just as something we do on Thanksgiving and Christmas, but as something we do daily.  Something we teach our kids to do from dirt to table, covering where our food comes from, who grows it, and how to prepare it.  We can do this at home, through 4-H, and in school home economic classes.

And you can get ideas and inspiration from blogs like mine!  🙂

On pregnancy, parenting, and managing FPIES with tiny humans

This is an archive of my old website & blog.

From small town Ohio to... Africa?

My Foray Into Food Storage